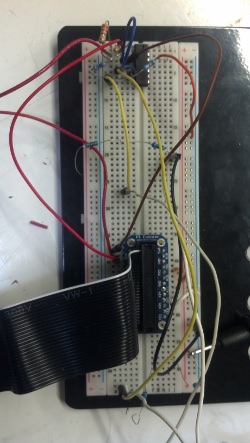 Another attack would be to perform man-in-the-middle on rsync. We'll take a couple of measures to mitigate that, including putting the nodes on their own dedicated subnet, with firewall and routing tables that drive traffic and communication only to the centralized server. So, the attacker would have to get onto our protected members-only LAN, and then bypass the firewall and routing tables to initiate MITM. Of course, by passing StrictHostKeyChecking=yes as an argument to rsync, then the transfer isn't initiated.

Failure to sync just means that any new users won't be allowed to open a lock, so anyone in the existing group can still get in.

Because the node will be on battery backup, the next most viable attack is to cut-off the power and wait for the battery to die. We would likely broadcast a power failure to IT, so we'd know to come down and wait for the power to come back up. That means the attacker would have to cut off the internet access as well. Probably a polling script could notify IT of an internet outage, so it would be 1-2 hours maximum that we wouldn't know both services were down. Since the Raspi is a low-power device, it would remain operational and keep the doors locked for several hours, at least 12+ hours.

The most viable attack would be either robbery of a member RFID card or rubber hose cryptanalysis - so keep your RFID cards safe, and let IT know the minute you lose any of them!