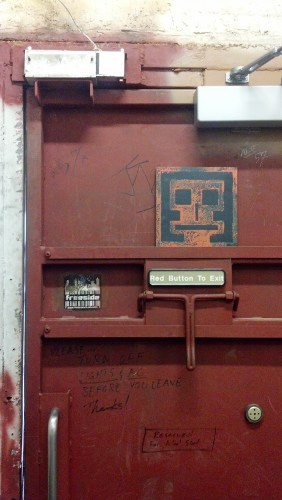 “Once upon a time, there was a king who ruled a great and glorious nation. Favourite amongst his subjects was the court painter of whom he was very proud. Everybody agreed this wizzened old man pianted the greatest pictures in the whole kingdom and the king would spend hours each day gazing at them in wonder. However, one day a dirty and dishevelled stranger presented himself at the court claiming that in fact he was the greatest painter in the land. The indignant king decreed a competition would be held between the two artists, confident it would teach the vagabond an embarrassing lesson. Within a month they were both to produce a masterpiece that would out do the other. After thirty days of working feverishly day and night, both artists were ready. They placed their paintings, each hidden by a cloth, on easels in the great hall of the castle. As a large crowd gathered, the king ordered the cloth be pulled first from the court artist’s easel. Everyone gasped as before them was revealed a wonderful oil painting of a table set with a feast. At its centre was an ornate bowl full of exotic fruits glistening moistly in the dawn light. As the crowd gazed admiringly, a sparrow perched high up on the rafters of the hall swooped down and hungrily tried to snatch one of the grapes from the painted bowl only to hit the canvas and fall down dead with shock at the feet of the king. ’Aha!’ exclaimed the king. ’My artist has produced a painting so wonderful it has fooled nature herself, surely you must agree that he is the greatest painter who ever lived!’ But the vagabond said nothing and stared solemnly at his feet. ’Now, pull the blanket from your painting and let us see what you have for us,’ cried the king. But the tramp remained motionless and said nothing. Growing impatient, the king stepped forward and reached out to grab the blanket only to freeze in horror at the last moment. ’You see,’ said the tramp quietly, ’there is no blanket covering the painting. This is actually just a painting of a cloth covering a painting. And whereas your famous artist is content to fool nature, I’ve made the king of the whole country look like a clueless little twat.”

This file contains additional information, probably added from the digital camera or scanner used to create or digitize it. If the file has been modified from its original state, some details may not fully reflect the modified file.
Retrieved from "https://wiki.freesideatlanta.org/index.php?title=File:Evereman-big.jpg&oldid=1474"