From Freeside Atlanta
Jump to navigation Jump to search 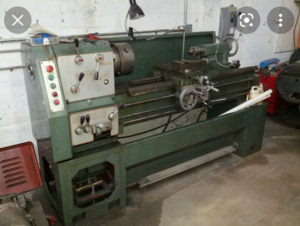 The lathe as it lived at Old Freeside 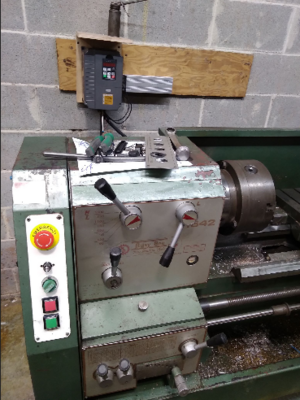 The VFD after it was freshly retrofitted, new custom control panel and all.

The lathe is one of the more dangerous tools in Freeside, as well as one of the most complex. As-such, do not use the lathe until you've either attended a class on it run by Freeside or have been signed off on it as competent in it's basic use.

The Busy Bee lathe is a very mysterious beast. Busy Bee appears to be a Canadian company that imports Taiwanese made tools, similar to Grizzly. Unfortunately it's not well supported, and repair parts and documentation for it are fairly hard to come by. It was originally a single phase 220v machine, but has been converted to 3 phase VFD control with electric braking. While it originally had a lube system, Lore has it that it plugged full of shmoo and stopped working, and no one ever fixed it because it was so seldom needed. Who knows?

controls specs, lube type, does the lube pump even work?

The lathe runs on a single phase 240v to 3 phase 240v Variable Frequency Drive mounted to the wall behind it. This allows the lathe speed to be adjusted on the fly by a dial on it's control panel. There are emergency stops wired to the stop button, E-stop button, and brake pedal. It would be real real nice if someone were to copy down the programming settings in the VFD so that if it ever breaks we don't have a hard time replacing it. :)

Single point threading drive and apron controls need to be refurbished and (re)installed.